Hadn’t had the Oskar Blues Ten Fidy until this afternoon. In the interest of transparency I’m writing this under duress. Well,

the 12.9% ABV duress caused by the Barrel Aged Imperial Stout monster that is Ten Fidy. What’s the old Lay’s slogan, “betcha can’t eat just one?” I’m betting you can’t drink more than one of these dark chocolaty boozy bad boys even if you may think you want too.

I don’t mean to over share, but I’ve had a beer or two in my life and Ten Fidy pretty much kicked my ass. So much so that I’d most def drink another some afternoon. Is WOWZERS overselling? Check out this warlock on beeradvocate.com “I highly suggest you acquire one if you have the means.” Yep, that’s a Ferris Bueller quote.

My video skills are not up to par but at least my little Ten Fidy video is short so have a look. I’m working on being better looking and having hair for future videos. We’ll see how that goes because the budget is very limited here. My daughter Malone asked for a production credit but not a writing credit (because I ad libbed the whole thing) but for what is in focus, thanks to Malone and anything that’s poorly lit or bad in any way…well, per usual that’s me. Oh, please excuse any typos because that ten Fidy diminished my already weak spelling skills.

The question I keep getting from my wife is WHERE DOES IT END? She says we don’t have space for any more logo’d pint

glasses. I don’t think she understands the difference between a Bell’s Oberon from last year vs one from 2018. I didn’t argue with her when she said I didn’t NEED a Sierra Nevada pint glass. I did however point out that the reason I needed another was because mine didn’t say Forecastle on it. COME ON, that’s a pretty obvious one isn’t it? Obvious on my side I mean.

She says I concoct all these silly rules to keep my pint night habit going. She doesn’t get that you have to use an Apocalypse glass for Fallout Dust. It’s just common sense that you shouldn’t put beer from one local brewer into another’s glassware. A Monnik beer in a Akasha glass is just plain wrong. Hold on, I don’t think I have a Monnik pint glass. I like that Hauck’s Pilsner. I’m going to have to get to work on getting my hands on one.

In her defense there are some pint nights she understands, kind of. She didn’t argue when we got the Warstiner Liter boot. I don’t think she realized how big a liter is. Hobgoblin is probably one of the coolest glasses I’ve collected along the way although I will confess I rarely use it. I have Yazoo from Nashville. There’s a pretty cool Anchor Steam etched logo glass and several varieties of Bell’s glasses which I’m sure you understand. There’s Hopslam, Oberon and Two Hearted to name a few.

There’s hundreds of others as well but I’m not sure I have enough. Soooo, you may see me out at a pint night here and there. I just don’t think it’s a problem. I can quit any time I want.

Here’s my sixty second video on Pint Nights. Give it a look in you have a minute. https://youtu.be/Nw6KL5nrVow

have found me visiting Gravely Brewing on Baxter Avenue.

They have a nice draft list from house made beers. I took home a growler of their Sprokets. 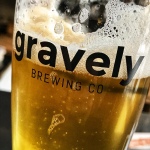 A German Pilsner which checks in at a very drinkable 5.6 ABV and 44 IBU. I’d say their description is dead on. It’s a traditional north German Pils with a crisp dry finish. Lighter than IPA’s but no “light weight” beer.

My wife opted to grab some food on the way home. Her stop at Drake’s in St. Matthews was the perfect opportunity to try a J Hole from Cincinnati’s Rhinegeist Brewing and Lagunitis Willitized Coffee Stout.

I like social media but I LOVE beer. That’s why it’s great the two come together in an app called Untappd. It’s available for Android and iPhone and is a free download on the App Store.

Why do I love this app?

Possibly my favorite feature is the “Verified venue” capability. In short, venues that are verified by Untappd can post their tap lists in almost real time. When a favorite seasonal is tapped at a local verified venue you’ll receive a notification and can make plans to head that way for a pint…or two.

If you’re already on Untappd add me. My username is RobbLee. If you’re just learning about this app add me, you can see what I’m up to.

Here’s a vlog post I made about the app. It’s just a minute long so give it a look.

Cheers, I’ll see you when I see you.